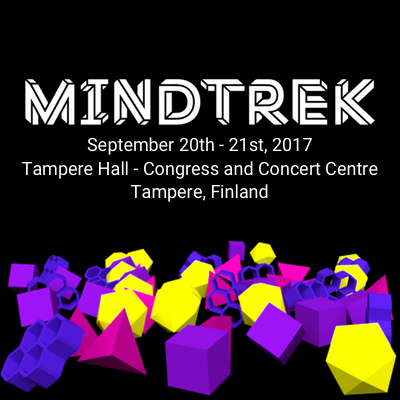 Mindtrek has been taking place each year in Tampere, Finland. Last year the conference attracted nearly 1,200 people with 38% international participants.

About Mindtrek:
Our mission is to promote the ecosystem of Finnish open technology solutions, as well as to function as a platform to facilitate the birth of innovations both nationally and internationally. The future vision of Mindtrek is to become the biggest technology and innovation platform in the Nordic and Baltic regions, where innovations are brought to life across industry borders. Mindtrek aims to offer high-quality presentations, networking between top companies and future talents, as well as new experiences and information on current trends. Mindtrek is for experts and innovators of different fields, who desire to be in the frontline of technological development.

Mindtrek is organized by COSS – the Finnish Centre for Open Systems and Solutions. COSS is a non-profit association that promotes open source, open data, open standards and APIs. Internationally COSS is known as one of the oldest centres for openness. COSS operation is based on far-reaching cooperation, communication and creating networks. The objective of COSS is to strengthen the competitiveness of Finland’s software intensive industries, promote the growth and internationalization of open source businesses and reinforce the development of the Finnish information society with the support of open technologies and communities.