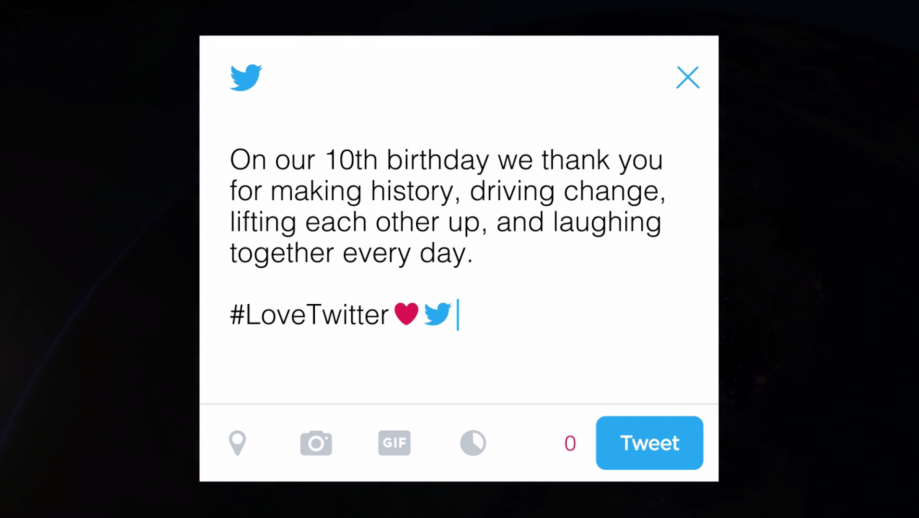 Have you noticed yet today that when you like a tweet, you get a rather jolly sprinkle of confetti? Have a go now, it’s fun!

The confetti is in honour of Twitter’s 10th birthday, which is today, 21st March. (We’re guessing at least that the confetti is just a birthday thing, although we’d love for it to be permanent. We’ve spent a good ten minutes already today just liking stuff and chuckling to ourselves.)

Here’s a little birthday message from Twitter to set the scene:

, we thank you for 10 incredible years.

Twitter has come a long way since it’s conception in 2006, and has even had a name change – back in 2006, it was called Twttr, as you can see from this, the first ever tweet:

just setting up my twttr

With 320 million users, it’s not hard to see how Twitter has become a force to be reckoned with. It’s widely used now by brands, and its accessibility and popularity have made it hugely important as a campaigning and awareness raising tool. It’s also expanded our world, quite literally, when it comes to science. We sometimes wonder if Tim Peake has any time between TV interviews and tweets to do any actual astronaut work:

The Emerald Isle looking lush and green from space…Happy #StPatricksDay to all down there! pic.twitter.com/wrnvbTBWIo

Despite its scientific and political influence, the most popular tweets and accounts are of course celebrity focussed. Katy Perry is the most followed Twitter user ever, with 84 million followers, and who can forget this, the most retweeted Twitter photo of all time?

If only Bradley’s arm was longer. Best photo ever. #oscars pic.twitter.com/C9U5NOtGap

Fandoms are big business on Twitter, with One Direction claiming six of the top ten British Twitter accounts, and hashtags have made it possible to bring together groups with similar interests, or people attending the same event. Hashtags weren’t something invented by Twitter itself though, they actually came from an early user called Chris Messina. High fives to Chris.

how do you feel about using # (pound) for groups. As in #barcamp [msg]?

Rumours have been rife that Twitter is going to remove its 140 character limit, its famous USP, especially since the character limit on direct messages was removed back in August 2015, but the jury is still out on that one.

We’ll just have to wait and see what the next ten years bring, but for now, let’s look back on what has been a great 10 years for the social media giant:

As you can see, social media plays such huge importance in the lives of people every day.

Join us for our Social Marketing track at #DMWF Amsterdam, where we’ll be discussing how it is fundamental in the world of Digital Marketing.